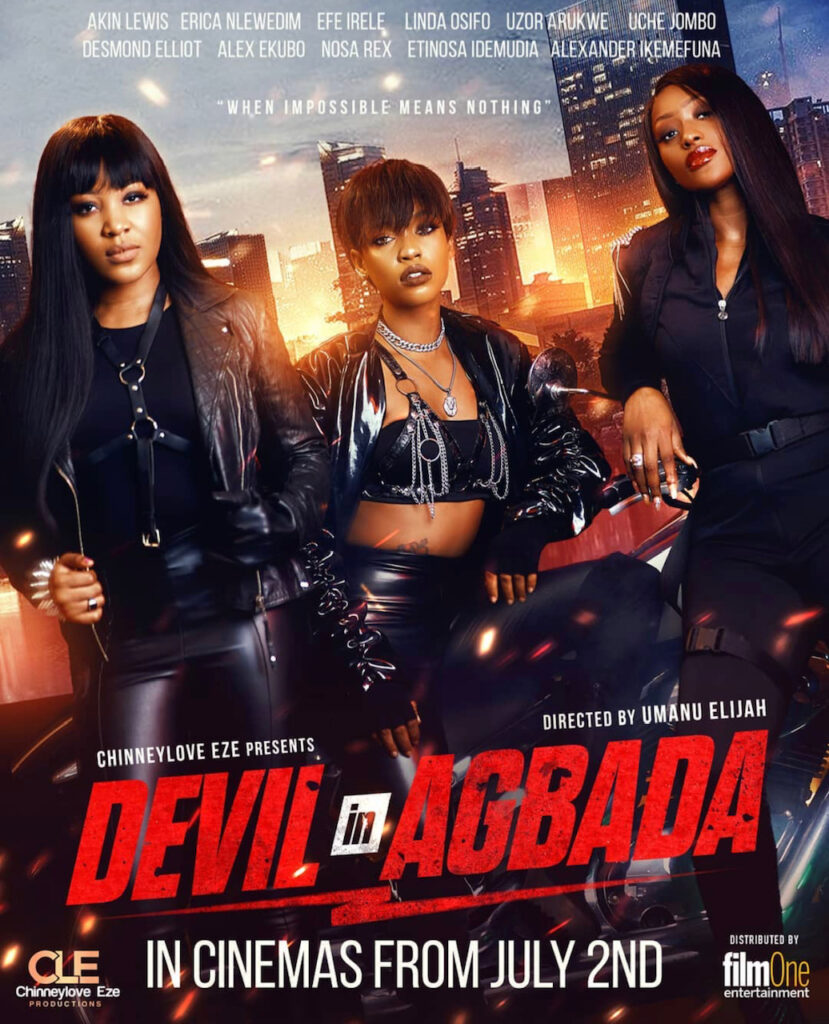 If maybe you’re expecting Devil in Agbada as a crime thriller with badass women as the protagonist coupled with a formidable villain and glittering action scenes— hold that thought with a pinch of salt, while its Hollywood-esque plot may try to deceive you, do not be deceived— the devil is in the details.

Devil in Agbada is a revenge/crime thriller that follows three young women trying to bring down a corrupt politician who tramples on the poor and rapes women. It stars Linda Osifo, Efe Irele, Erica Nlewedim, Akin Lewis, Uche Jombo, Uzor Arukwe and others.

Devil in Agbada is heavily constrained by its lack of creative storytelling, exciting scenes and well though-out fighting sequences which films of these type are notable for— which leaves this crime drama with little or nothing to savour.

The three female leads played by Efe Irele, Linda Osifo and Erica Nlewedim are trained by a ruthless henchman, Machado (played by Uzor Arukwe) for six months to get revenge against the politician. The D-Day arrives, these ill-equipped women defeat almost a dozen of highly trained men with little or no effort whatsoever coupled with ridiculously cheap fighting scenes. How believable is that?

The main quandary exists at the end of the film when Kiki( played by Efe Irele) is released from prison after two years by a government pardon— regardless of the fact that she committed murder (involving ‘, how?

Despite its limitation, Akin Lewis brings colour to the film. He re-imagines his character from the famous political drama “Your Excellency” where he played a funny politician running for Governor, but this time the character is nuanced in several ways— the character is brutal and heartless but share resemblance with the character in the 2019 film because of its comedy reliefs.

If Akin Lewis’s charm and undeniable talent are enough to make a great movie, Devil in Agbada will be at the top of its class, but its uninventive story and shallow dialogue make it just another generic and average Nollywood film.